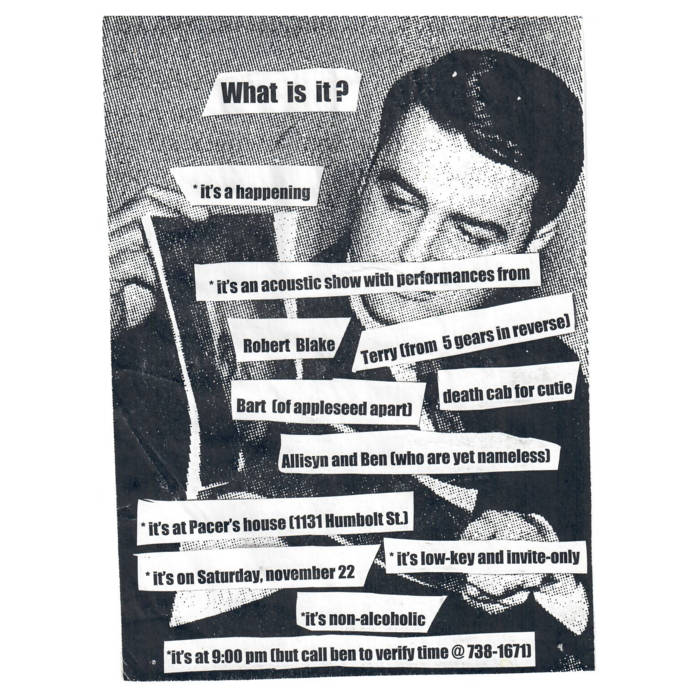 Scar Humble beginnings, really good performances of songs from YCPTSWC, a bit quiet but turning death cab up is not an issue to me.

alainsane Hi. I don't know how to download the opensource freeware, Audacity, and tweak the levels of this audio track myself, so for the paltry 4 dollars I paid for it, could you go and remaster the whole release for me? [/s]

fancybread This is so special. Thanks for putting it out there for those of us who were 7 years old and far away when this show was played!

Your bruise
President of what?
Champagne from a paper cup
Amputations
Two cars
Pictures in an exhibition

and all the fun in-between'song chat.

Patrick Weber This is awesome. Can we get a level matched version? Is that the correct term? Very very quiet! I don't want to be startled by like some Windows blip while listening if possible.

This is a recording of the first ever Death Cab for Cutie show. It was made by our friend Trevor Adams on his dictaphone at The Pacer House in Bellingham, Washington on November 22, 1997. Sprawled across couches and sitting crosslegged on the floor were 25 of our closest friends and fellow musicians. Everyone played acoustic or semi-acoustic with no PA. Trevor made and passed bowl after bowl of microwave popcorn because he was (and I assume still is) a great host.

Chris Walla and I had just finished the You Can Play These Songs with Chords cassette and we thought it would be fun to play a few shows around Bellingham to celebrate the release. We recruited Nick Harmer to play bass and Walla’s childhood friend Nathan Good to play drums. None of us thought we were starting a band nor did our ambitions for DCfC extend very far past this particular evening. We simply thought it would be fun to play these songs for our friends before moving on to other things.

I remain forever grateful to Trevor for inviting us to play in his living room 20 years ago today. It was one of the greatest nights of my life at the time and its significance has only grown since.

Death Cab for Cutie is an American alternative rock band formed in Bellingham, Washington in 1997. The band is composed of Ben Gibbard, Nick Harmer, Jason McGerr, Dave Depper, and Zac Rae. They have been nominated for eight Grammy Awards, including Best Rock Album for their most recent release, 2015’s Kintsugi. Their ninth album 'Thank You for Today' will be released later this year. ... more

Khruangbin and Greg Foat stop by with their amazing new LPs.